For Christmas I decided to make a set of matching wooden planes for myself and my dad. Check out some snapshots of the process and the final product.

Still waiting to for more Tron Disc parts and to build it, but its coming together! Check out some of the parts and get a taste of the final Tron Disc.

With the mechanical design complete I needed to design the electronics to make the Tron Identity Disc actually cool and do something other than just sit there. I would need to design a few different circuit boards to hold different sections and perform different tasks. Each of these was already determined from the mechanical design. I had already identified and chosen some parts during the CAD process but the schematic can be completed. Following this the circuit board layout. As well as the not planned stuff. Things such as continuous back and froth between CAD packages and models, and datasheets and schematics.

Picking the parts was a mixed difficulty task, some really easy and knew straight away others took a bit of research, digging and asking around. Allocating footprints was easy as I chose parts I could solder by hand making the smallest package 0603 and a few other may just take a bit more patience to get into place.

Now the schematics have been completed it was time to assign footprints and move into laying out the PCBs.

Laying out the PCBs took a little while. I constantly pushed the changes to github and quite often went back and forth between a few layouts trying to find one that worked out well enough to continue. That being said the final layout should work but is probably not the most space efficient or optimised, that will be something for version 2 maybe.

To begin I grabbed the board outlines form the CAD models from Fusion360, then imported the file into KiCAD on the edge cuts layer. I decided to start designing for the standard 2 layer boards. I went the entire way through the design working around the 2 layers, and did not see any major benefits of more layers. The track widths varied around the board depending on the power and location on the board trying to maximise the width to reduce the possibility of failure. I also put in copper fills around the board to help with the complex geometry.

I faced quite a few challenges developing the electronics design for the Tron disc, but argubly way less than the mechanical design.

The Design Rules Check (DRC) helps check to see if the board parameters meet the specified rules. These specified rules ensure the board is manufacturable, meets the minimum spacing requirements and a few other bits too. This error occurred because of how the minimum distance is calculated and due to the angle of the parts the minimum distance calculated was less than the parameter in the DRC. To get around this i changed the DRC parameter for these parts by -0.01. This was a small enough change such that it was not an issue for manufacturing but large enough to pass the DRC.

Routing in a circle isn’t easy in KiCAD but is apparently possible in some other software packages. This meant that some of the traces are not aesthetically placed around the board. I did attempt using an open source plugin to help create some curved tracks but did not use them very much in the final design. However I did use a plugin that created circular fill regions to help create some nice round copper lines between regions. I also made use of the inbuilt shove routing once a majority of tracks were doing to push tracks into nicer locations.

Providing power to all components was a slight issue. The main problems being reaching to opposite end of the PCB. To solve this issue I used copper fills on most areas of the PCB. KiCAD connected the majority of the components. After this I went in and joined the remaining unconnected pads. This allowed me to quickly get power to the main areas of the board before routing the rest of the tracks.

The last issue was part placement. It wasn’t a major issue, more tedious. The main issues i had was trying to evenly space the parts out at the correct angles and at the right interval. I attempted some of this by hand and that’s how I did the entirety of the alight arc PCB. As for the main PCB I decided to do some research and found a plugin. The plugin allowed me to select parts and arrange them in a circle. It wasn’t perfect but at least rotated the parts to the correct angle. I then placed the parts manually lining them up with where I wanted them.

And along with those challenges I did have help along the way from my fellow engineer. You can check out some of his work here (https://ralimtek.com/)

I had the crazy idea to try and design a Tron Identity disc. Follow along below to see how I did it and some of the decisions and processes I made along the way. Background Tron is a science fiction franchise created by Steven Lisberger. …

The Idea I was walking around the mall the other day and noticed a metal plane decoration. My immediate thought was “I can make that”. So I did… well, with some slight modifications, the first being my plane was made out of wood and not …

It has been a long time since I posted last about my digital clock, but it’s finished, and here’s what it looks like.

It has been transformed from the schematics and breadboard to fully custom design circuit boards. The circuits boards have everything built onto them and only require a 9V+ DC power supply to operate.

It was a big jump having only made one PCB before making this one. I changed software and made 3D models of every part, which helped when designing the case. The case has a laser cut front panel and fully 3D printed enclosure. And of course, they all feature my little logo on them somewhere.

If I was to make a clock again I probably wouldn’t make another one out of pure logic. It’s a great thing to be able to and I proved it’s possible, but it increases the number of components and reduces the number of extras that can be added easily. In saying that, I think this would be a great project for anyone who wants to make something practical and that works but without having to program anything.

I thoroughly enjoyed this project, it was a good break from university work but allowed me to learn new things and improve my current skill set. Let me know what you think, or if you tried building on yourself!

Most digital clocks these days are made from microcontrollers, but I wanted an added challenge to use it using only logic chips trying to focus on using the TTL (74xx series) integrated circuits. So, my plan was to design and build a discrete logic clock …

This is the my first website that I have published, and this is how I went about creating it all.

The PCB design is in its final stages and we are running through all of our design files with a fine tooth comb.

Our circuit board must have an Intel Edison connector, GPS, and a battery connector. Most of the other components on the board aren’t necessary but they would be great to have. These include such things as PWM output connectors, a USB connector, I²C, and a UART port. So in total our circuit board consists of a few connectors and port (Edison, USB, Battery in, PWM, I²C, UART, GPS and SD Card), 2 logic level shifters, a 9DOF (9 Degrees Of Freedom), and a Barometer.

Below is an image of what the file looks like from the PCB editor I am using. Everything in red is the top copper layer, everything in blue is the bottom layer of copper, and things in other colours (grey and black) represent the outlines of components, silk screen and the board dimensions. 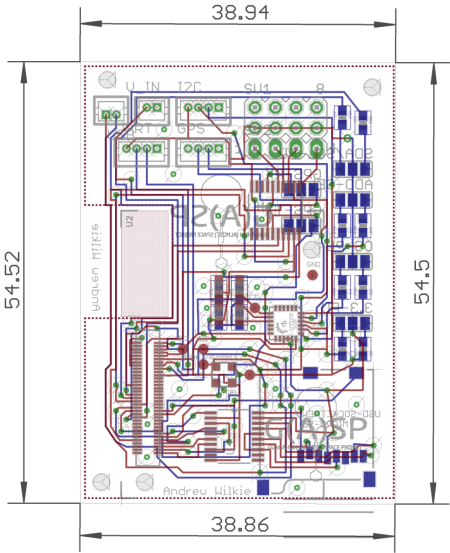 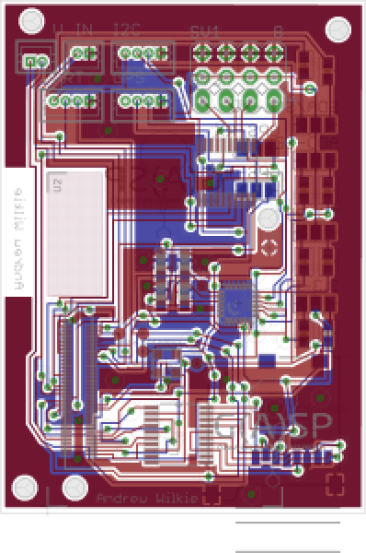 From this file I will export gerber files which contain all of the holes, silkscreen, solder-mask, pads, vias and everything else necessary fro the manufacturer to create the board.

The boards have altered slightly from what is shown here, but not too much. Our most recent files have been sent out to our manufacturer and we should receive them in a few weeks. The PCBs will look similar to the images below. 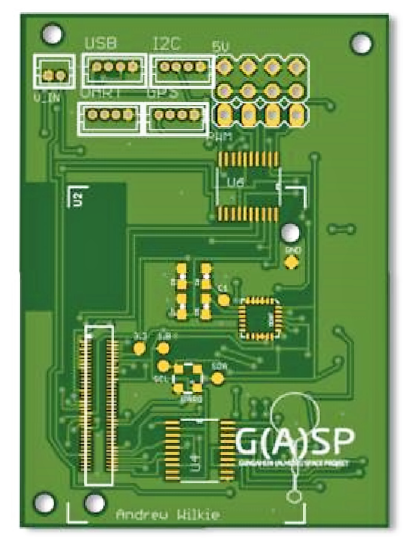 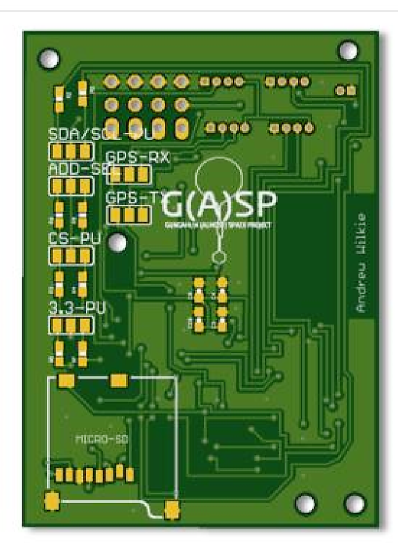